Knitters, especially Fair Isle knitters, will know what Shetland Wool Week is. For those that don’t, it is a celebration of Shetland knitting and textiles, Shetland sheep and rural farming. There are classes, lectures, organized tours and exhibitions all over the islands. This was the ninth year of the event. I have two friends who have attended for several years and this year I decided to join them! For me it was also a journey home to Scotland which I haven’t visited for many years. I was so looking forward to Scottish food, especially fresh salt water fish (hard to find in Kansas) and lamb.

Knitting the hat designed by the chosen Patron for the year is a prerequisite for attending the opening event. This year Elizabeth Johnston designed a hat called the Merrie Dancers Toorie which depicted the colors of the Northern Lights (Aurora Borealis). This was only my second attempt at Fair Isle knitting but I can certainly say I’m hooked after this! Shetland yarn is not as soft as alpaca but is easy to work with. 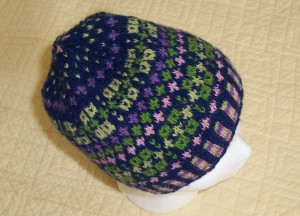 Knitting the hat was almost easier than the journey to Shetland! After three different flights we arrived in Aberdeen, my hometown. We took the overnight ferry from Aberdeen and arrived in Lerwick, Shetland, twelve hours later. I enjoyed the ferry ride, the longest time I have ever spent on a boat. I even had my first taste of Scottish ‘fish and chips’ on board! As we approached the docks we had a lovely view of the harbor.

Once we got our bearings we collected the rental car and then we were ready to shop for yarn! We visited the two main yarn shops in Lerwick, Jamieson and Smith,  and Jamieson’s. Both stores had a wonderful selection of natural colors as well as beautiful dyed yarns, all 100% Shetland wool from the islands! I would like to say that the yarns shown are the only ones I bought, but we visited both stores several more times during the week! More of that in later posts. 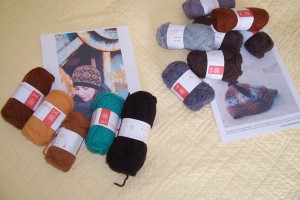 Some of my yarn purchases. 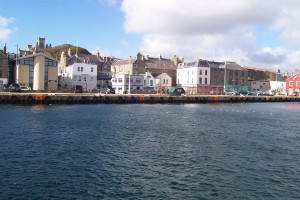