The views from the guest house were beautiful. Some mornings it was sunny and the North Sea was calm. On other days it was rainy and blowing a gale but being able to see the sea from my window was such a treat. I grew up in Aberdeen which is a large fishing port and market town on the east coast of Scotland and later the center of the North Sea oil industry. We lived about four miles from the sea but it was always there and we could visit when we wanted. I still love the sea and having it all around for a week was almost worth the trip by itself. 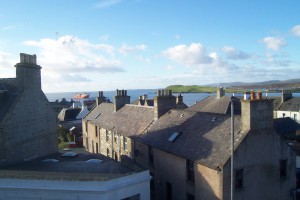 Room with a View

On the first official day of Wool Week, we headed for the Shetland Museum which was ‘The Hub’ or gathering place for participants. Knitters had come from all corners of the globe it seemed. Many wore their Merrie Dancers Toorie. No two hats looked the same. Others wore Fair Isle jerseys. About 600 people had come to Wool Week which was a large influx for Lerwick, a town of around 7000. There were class venues scattered around Lerwick.  Other classes took place throughout the islands that make up Shetland.

Now for some potted history! Shetland is an archipelago of over a hundred islands. Only fifteen of these are inhabited. People have lived in Shetland since prehistoric times. In the 8th century The Vikings came to the islands. Between 1195 and 1493 Norway ruled Shetland.  In 1493 King Christian I pledged the islands as security for the dowry of his daughter Margaret who was betrothed to James III of Scotland. The money was never paid and James III subsequently annexed the islands. The close ties to Norway remain strong and the local dialect is similar to Norwegian. The Aberdeen dialect with which I’m familiar is quite different.  Of course people speak English too, but it is fascinating to hear them slip into dialect when talking to one another.

I had come to Shetland to learn from the experts on knitting Fair Isle and lace but I soon discovered there would be so much more to this trip than knitting! 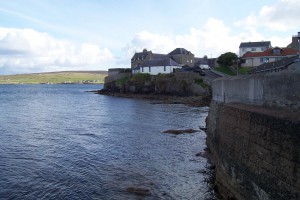 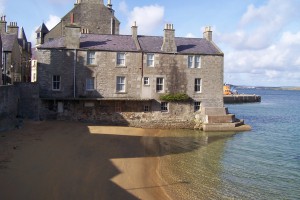