Alpacas like all animals can have health issues. Sometimes you have to make difficult decisions about their future care. Several years ago I wrote about our ‘Golden Oldies’ – two alpacas who were in their late teens. They are still with us. Leia is now 21 and Destino will be 21 in August. Leia has been a very healthy alpaca. Her pregnancies and deliveries have been trouble free and she had never needed veterinary care until two years ago.

One day we noticed she had a cloudy eye. We called the veterinarian as we have learned over the years that eye issues can become critical very easily. Our vet told us that Leia had a cataract in her eye and had also detached the lens causing the pupil to dilate. At first she seemed to be coping but then we could see that she was uncomfortable. After several more vet visits, he suggested that the best option would be to remove the eye. Although the idea of the surgery was rather alarming, we knew of another alpaca that had had this done successfully. We decided to go ahead with the surgery. Fortunately it went well and Leia returned home and settled back into her routine. She had some issues with an infection around a few of the sutures but once over that, she managed very well and adapted to the loss of vision in her right eye. We were always careful to approach her on her left side if possible and also speak to her so that she knew we were there.

She has done well over the past two years and has maintained condition well even in this past winter which seemed to go on for ever. A few days ago we noticed that she was bumping into things and was having difficulty finding a feed bowl and the water bucket. We could see that her eye was cloudy and assumed she had another cataract. Our vet confirmed that it was a similar situation to the first eye. At the moment she is on pain medication and we are watching her carefully to see how well she is coping with not being able to see. We monitor feeding times to make sure she can find a bowl and water. We placed her with a group of five alpacas so that she has access to a smaller pasture than the main herd. She has been going out and in from the barn to the pasture. We hear her humming frequently but it is hard to know if she is in pain or she’s reacting to her blindness.

We are now having to consider her future. Leia is one of our foundation females and has earned her retirement. Should we consider surgery again? Would she cope with the anesthetic and aftermath of surgery? Should we consider putting her down? At the moment we do not have an answer. By watching her closely Leia herself might tell us. Whatever we decide it will not be an easy decision. 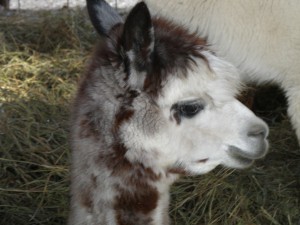 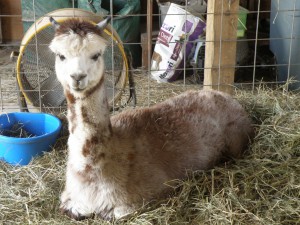