I’m sure I said somewhere that I’m not a fan of surprises. This one was a birthday surprise! It snowed on my birthday, just one of the many snowstorms to hit the farm this winter. We trudged through the snow to do the morning chores. My husband got to the alpaca barn first.  There he found a new cria walking around outside in the snow and he was cold! The first priority was to get him dry and warm. We rubbed him with towels and used a hairdryer to get him dry as well as dipping his navel. His mom was not too happy about our intervention but tolerated our presence. Once he was dry we put two cria coats on him and added fresh straw to the pen.

We then turned our attention to mom and found she had no milk. Thank goodness we keep colostrum on hand. This time we had a small amount of alpaca colostrum that we had milked from a female whose cria was stillborn. We gave him this as well  as the cow colostrum. This little guy took to the bottle immediately and continued to nurse well through the rest of the day. The following morning, his mom had a full udder and he had to learn where the milk bar was. We continued with supplemental feeding for a couple of days until he decided that mom”s milk was best. He is continuing to make good progress after his less than ideal start in life.

The two pictures are taken a week apart. If only he had waited a week he would have had sunshine and warmer weather. We decided he needed a name which reflected his wintry start in life. The Aberdeenshire  word for snow is “snaw” which did not seem appropriate so we settled on a Shetland word for snow – “flukra”. There is nothing like giving your alpacas interesting names! 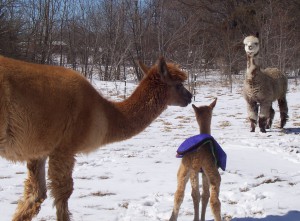 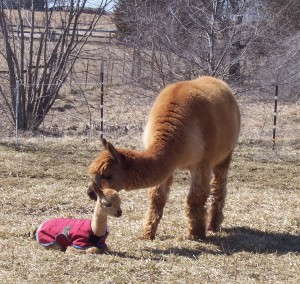